Sometime last week, I messed up my SI joint while doing second series; I think I was overzealous in getting my leg behind my head, trying to do so on a day when my hips weren't particularly open. I had read and heard somewhere that doing Hanumanusana is beneficial and therapeutic for bringing the SI joint back into alignment, so for the past couple of days, I have been doing this pose as an "extra-curricular" thing outside of my practice, even though I am far from being at that place in my regular practice (I know that in Ashtanga, it properly comes at the end of third series.).

This extra-curricular practice has been going quite well so far; if nothing else, my SI joint is definitely feeling better. This morning, I also made a video of myself doing said pose, just for the heck of it. And since videos are arguably made to be shown, I have also posted it on Youtube. Here it is:

As you may have noticed, I am not wearing yoga shorts in the video; I'm basically doing the whole thing in my briefs, which is my usual daily practice attire (if you can call it that :-)). I hope you are not offended by this. If you are, well, this is only my second yoga video in all my years of practice (the first can be viewed here), so you can be assured that you will not be treated to the sight of me doing yoga in my underwear on a regular basis. I just thought, "Well, what the hell, I did my yoga practice in my underwear when I was staying at my parents' in Singapore earlier this summer, and even they--being the socially conservative Confucian folk that they are--were totally cool with it. So why should the enlightened readers of my blog care what I use to cover my, ahem, vital body parts, so long as they are covered?" Right? :-)

You may also notice that my breaths in Hanumanasana are rather short. I don't think Grimmly would approve of this, but this being a quick show-offy demo video (I really do have other things to do in the day), I decided that I could afford to have slightly shorter breaths.

Anyway, I hope you enjoy the video, and are not unduly offended by the lack of appropriate yoga clothing.

Speaking of yoga clothing, I wonder if Lululemon sells men's yoga shorts? If they do, are they priced affordably? I have a feeling I know the answer to the second question... But anyway, I bring up Lululemon because I was in Ketchum, Idaho this past weekend, and they actually have a Lulu store there. A Lulu store smack in the middle of rural Idaho? Who would have thought? But then again, Ketchum/Sun Valley isn't average small-town America. Ketchum and neighboring Sun Valley are well-known tourist resorts, and many celebrities have pricey homes in the area. So, come to think of it, it really is no surprise that Lulu has a store there.

While in Ketchum, I paid a visit to the grave of one of its better-known residents, the writer Ernest Hemingway. Here's a picture of the gravestone: 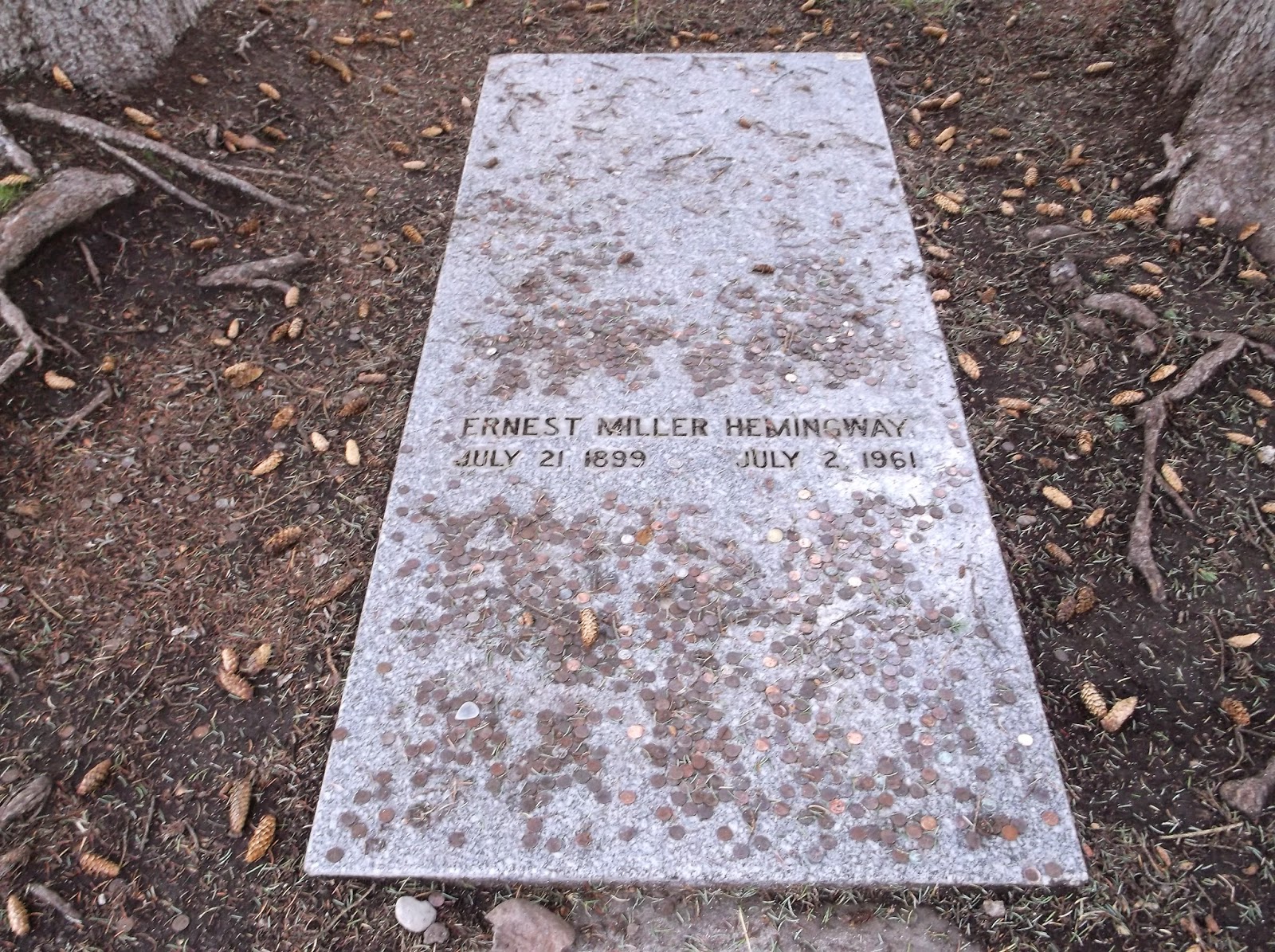 I had recently reread The Sun Also Rises, and was very moved by Hemingway's rendering of the existential and moral crisis of the so-called Lost Generation. So visiting the grave was a kind of pilgrimage for me. The grave is located unassumingly in a public graveyard, and there are no prominent signs in the town to guide you there, so it took me a bit of asking around to find my way there. The whole process of asking around is in itself an interesting story, and I can probably write an entire post on it, but well, let's save that for another day. The present day is not getting any younger, and I need to go get a few more things done before this day is over.