Coffee and Siddhis: A Fantastic Tale

Disclaimer: Before you read the rest of this post, and possibly accuse me of being disrespectful, irreverent, and/or downright blasphemous, let me say a couple of things here: While most of the contents of this post feature events that actually happened and people that actually existed (and still exist), a significant portion of the post (especially the story about siddhis) is sheer fantasy, the product of an over-excited, over-caffeinated brain (mine). The reader will be well-advised to exercise his or her personal discrimination in discerning the difference between fact and fantasy in what follows. The author will not be held responsible for any consequences that might arise for the reader's life and practice as a result of reading this post. If you do not agree to this disclaimer, read no further! But hopefully, you will agree to this disclaimer, and we will all have some fun in the name of good, clean entertainment.

First, a little pop quiz. What is the relation between this

Photo by Tom Rosenthal
and this? If you have been following the recent conversations in the blogosphere about coffee in the ashtanga practice, the answer should be obvious: No Coffee, No Prana!

Claudia's most recent post features a lot of valuable information that Sharath gave in conference about lots of questions pertaining to the yoga practice and life. The last part of Claudia's post pertains to Sharath's comments on the role of coffee in the practice, in which he repeated his by-now famous quote: "No Coffee, No Prana!" According to Claudia, this is what Sharath said to do before practice:

"Drink half a cup of coffee! No coffee no prana!"

Claudia continues, "There is a very famous vedic (?) saying for Brahmans about how they are fond of food, he jokes he is fond of coffee.  Those were his [Sharath's] words, I am just paraphrasing a little."

Claudia then goes on to relate a very interesting back story:

"Sharath said that his grandfather would wake him up at 4 in the morning every morning and give him a cup of coffee.  Students would be arriving and he would be making coffee for the whole family.  One time his son Manju came to visit and on the second day he did not want the coffee.  Jois said OK, and left him alone. About a week later Manju was asking for coffee again..."

I have been thinking about Sharath's endorsement of coffee and some of the contrary opinions that other yogis have held about the same thing. (For a description of the possible schools of thought that exist out there about the relationship between coffee and yoga, see my January 6th post on this topic.) Even among Ashtangis, there is quite a bit of divergence about the effects of coffee on the practice. Gregor Maehle, for instance, does not seem to endorse coffee quite as wholeheartedly as Sharath. In his book Ashtanga Yoga: The Intermediate Series, he claims that:

"Coffee is a stimulant that mobilizes and expels prana that otherwise is used to stabilize the pelvis. This is not a moralistic statement but is based on observation. Over the years, most of my students who had a tendency to have a twisted or imbalanced pelvis were those who insisted on continuing their coffee habit. Decaffeinated coffee or tea does not appear to have the same destabilizing effect." (Footnote no. 16 on page 125)

Personally, I find this statement a bit mystifying. For one, just how did Maehle come to this conclusion? I mean, I'm sure there are tons of other people who have instability issues in other joints (knee, shoulder, hip, etc.). Are their instability issues also caused by coffee consumption? If not, how is Maehle able to isolate the pelvis, and conclude that only the pelvis is affected by coffee consumption? If he were able to isolate the effects of coffee on the pelvis, how did he accomplish this? (Did he do some kind of a long-term controlled experiment in his shala? Hmm...)

But the purpose of this post is not to investigate Maehle's claims. I just couldn't suppress my curious and skeptical mind. Instead, I'm going to try doing something a bit more fun. I have a story that might explain why Sharath and Maehle (and many other yogis) have such divergent views about coffee.

The basic premise of my story is very simple. The coffee that the Jois's brew and consume is a special kind of coffee that is very different from any other coffee anywhere else on earth. They are able to brew this special coffee because of certain siddhis that they possess. In order for this story to make sense, a little back story is in order. There is a secret hidden within the ashtanga system, one that is revealed only to certified ashtanga teachers and beyond: As one gets to certain advanced stages of the practice, one acquires certain siddhis or transcendental powers. These siddhis are not made known to the public because Guruji did not want people to start practicing ashtanga for the wrong reasons. As will be clear in what follows, these siddhis are superhuman powers which can cause great harm and suffering to humanity if they are in the wrong hands ("With great power comes great responsibility..."). Moreover, the practitioner has absolutely no control over whether or when he or she acquires these siddhis. He or she just wakes up one morning, and finds that he or she mysteriously has them!

Briefly, these are the siddhis, along with the approximate stage in the practice at which many practitioners are granted them. The stages are approximate, because some practitioners get them earlier, some later, and some never get them at all.

1. Superman Vision: It was James who first alerted me to the possible existence of this siddhi, and who got me started on my investigation. This is quite possibly the coolest and most spectacular of the siddhis. It allows the practitioner to (1) have x-ray vision that enables him or her to see through objects, (2) emanate heat-rays from his or her eyes that can burn through the toughest metals on earth. Here's a demonstration of this siddhi by a famous ashtanga practitioner: 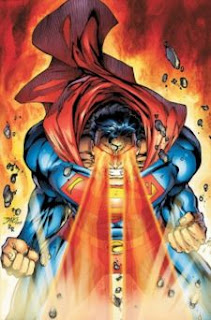 Pretty cool, eh? This siddhi is often granted to practitioners who have completed at least the 3rd series, and who are at least halfway through the 4th. Symptoms that can indicate you have this siddhi: (1) You wake up one morning, and your eyes feel warmer than they usually do. When you gaze at somebody for more than 2 seconds, that person flinches/grimaces in pain, and averts his or her eyes. (2) You start seeing things in people you would rather not see (but you can't help seeing them anyway), or you start treating people as if they are transparent (because as far as you are concerned, they are!).

2. Limited teleportation: As with superman vision, this siddhi is also often granted to practitioners who have completed at least the 3rd series, and who are at least halfway through the 4th. This siddhi enables the practitioner to instantaneously transport himself or herself to any particular point within a confined space, such as a room or a shala. As you probably figure, this is a very useful siddhi for mysore teachers. Used in combination with superman vision, this siddhi allows the teacher to see anywhere in the room, and mysteriously and instantaneously materialize in front of unsuspecting ashtangis when they are about to do the postures that they are most anxious about. I personally believe that Kino MacGregor possesses both superman vision and limited teleportation. For my account of this, see my guest post about my experience in Kino's workshop on Claudia's blog.

3. Transmutation of substances: This is a very cool and useful siddhi. It comes in stages. At the highest stages, it allows the parctitioner to instantaneously and radically transform the chemical structure of any substance within his or her field of vision. Practically speaking, it means that the practitioner can transform rocks into gold (Do I have to explain why this is a very useful siddhi to have?). However, there is only a very small handful of yogis throughout history who have attained such an advanced stage of this siddhi. At a lower stage, it allows the practitioner to alter the pranic effects of a particular substance. Coffee is a prime example. It is this siddhi that enables Guruji and his family to alter the effects of coffee on prana, and brew a special kind of organic coffee that gets the prana going, whereas ordinary coffee (the kind that Maehle talks about) just scatters your prana all over the place and leaves your nervous system (and your pelvis) totally out of whack.

In light of this siddhi, we can piece together a more complete picture of what actually happened with Manju. Manju grew up drinking the siddhi -powered-coffee that Guruji made, which enabled him to have all his yogic prowess. After he moved to the States, Manju discovered that no other kind of coffee had the prana-focusing power of the Jois brand. So he gave up coffee. When he went back to Mysore to visit, he forgot about the special power of Jois coffee. Which is why he at first declined the coffee. But after being there for a week, and feeling the yogic powers emanating from the rest of the family, he finally realized what he had been missing all these years, and came back to drinking the special Jois' brand coffee. Which might explain why Manju's teachings seem to be very much in demand in recent years (he got a new boost in his yogic prowess from drinking Jois coffee again).

So, Sharath's quote should be more accurately rendered as "No (Jois) coffee, No prana!"

Hmm.. No wonder I still haven't completed second series after all this time...

4. Becoming indistinguishable from one's guru: This is also a very cool siddhi. I also believe that Kino has this siddhi (see, again, my account of Kino's workshop for more details). Symptoms that can indicate you have this siddhi: (1) You start speaking in terse aphorisms that may not be grammatically correct ("Bad Man/Woman!", "Do your practice, and all is coming", "Why fearing, you?", "When you coming Mysore?"), (2) You begin to speak in a distinctively South Indian accent, much to the puzzlement (and possible amusement) of your friends.

You probably already know this, but I feel that it is my personal responsibility to remind you of this again: Although these siddhis are very cool things to have, the object of yoga practice should not be to acquire things (and when all is said and done, siddhis are also things). So do not fret if, like me, you have none of these siddhis: Do your practice, and all is coming!