So much of our regular Ashtanga yoga practice relies on being able to bear weight with our hands: Chaturanga, vinyasas, jump-backs and jump-throughs, you name it. Because of this, injury to the wrists can often be a very debilitating and demoralizing blow to our practices. It's easy to become discouraged when a particular body part that has served us so well and whose reliability in carrying us from point A to point B on the mat we have virtually taken for granted suddenly breaks down and becomes the source of great pain rather than pride.

But if you are suffering from wrist pain or injury, fear no longer! In response to my recent call for guest posts about healing from injuries in the practice (I'm still accepting guest posts, by the way, just so you know...), La Gitane from Yoga Gypsy has written a very illuminating post in which she describes in great detail her journey of healing from a recent wrist injury. She includes some very useful suggestions on how to modify your practice to work with this great bane to Ashtanga practice; now we will have no excuse not to practice if and when, God forbid, we injure our wrists. Sigh...

Before I shut up and let you read her article, I feel that I should also say a couple more things about La Gitane. In my mind, she is most famous in the Ashtanga blogosphere for writing that infamous open letter to Ashtanga back in June, in which she admits that she's, ahem, seeing other yoga. Ha! Talk about Brahmacharya violations... (Bad Lady!) I don't know if she's now back with Ashtanga, or if she's still persisting with her Ashtanga infidelity; in either case, what other people do (or don't do) behind Ashtanga's back is none of my business, so I'll leave it at that :-)

In "real" life, La Gitane works in international development as a communications professional, and is based in East Timor. She also teaches yoga.

Alright... now that I have gotten my daily ramble out of my system, I shall leave you in peace to enjoy La Gitane's post. More later.

by La Gitane
When I saw Nobel was asking for guest posts about practicing with and healing injuries, it felt pretty serendipitous, because about 6 weeks ago I injured my right wrist. I think it happened while I was practicing an arm balance: I lost my balance and started to tip forward, but caught myself. I didn’t notice it at the time, but I must have over-strained my wrist in that moment.

Anyway, one day my wrist just hurt like crazy. The pain was most pronounced in the wrist joint itself, but radiated all the way up to the elbow. I couldn't put ANY weight on it. However, I was able to modify my practice and now it is healing quite happily. Since I know that the audience of this blog is an Ashtanga audience, I’ll write from the perspective of having a wrist injury but wanting to still do an Ashtanga or vinyasa-based practice. I shouldn’t have to say it, but of course, if you are practicing with an injury you are always best to seek a doctor’s opinion – especially if you have pain that lasts for more than a week without any improvement.

For me, there are two key components to dealing with an injury in yoga. The first is quite obvious: protect the injured area and allow it sufficient time and space to heal. The second is to identify the root cause of the injury and work to prevent it from happening again.

It's important to remember that in yoga therapy, the mantra is "function over form". You have to let go of attachments to a particular pose, and find others that move or stretch your body in the same way. From a physical perspective, for every pose that you aren’t able to do, look at the pose and identify what the main muscles are that are stretched and strengthened, and then find other ways of achieving that. From a mental perspective, think about these modifications as an opportunity to deepen your sadhana, your study of the practice, and as an investment into an injury-free future: not as a sacrifice.

Dealing with a wrist injury in vinyasa yoga involves some pretty obvious modifications, but in fact, it didn’t affect my overall practice too much. I was still able to practice a dynamic flow with a combination of standing and seated poses. I also wore a wrist brace to support the wrist and reduce movement, and massaged the affected area daily with anti-inflammatory gel.  I wore the brace to teach as well, and used the opportunity to talk about wrist safety and alignment!

Part I: Dealing with the Injury – practice modifications 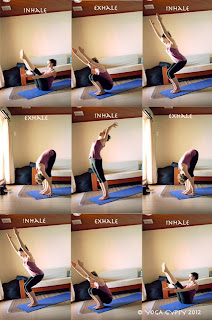 This, of course, is much trickier. For wrist injuries, there are a few possible causes that come to mind. Maybe you readers can add more:

I think in my case, 4. are issues I need to work on in my regular practice, although the injury itself was caused by 5. So I am working on building core and back body strength, and making sure that I do my jump-throughs and -backs slowly and mindfully, with control.

Thanks for reading! Have you ever practiced with a wrist injury? What did you do?
Posted by Nobel at 10:45 AM