Chaturanga for the brain, chess for the body

It's been a rather lazy, got-nothing-much-done Saturday. I got up a little later than usual this morning, did full primary with Sharath's led primary CD, and then drove around town running a few errands. And then I came to this coffeeshop where I usually do my work, where I played (and won) a game of chess with a guy from Saudi Arabia. I'm just now settling into the "real work" part of the day, and trying to get a little "real" work done (preparing for classes, doing my research, etc.) before the evening rolls around.

Speaking of chess, I just found out from Wikipedia that the game is believed by scholars to have originated in India during the 6th century CE, where it was known as... guess what? Chaturanga! As many of you who read this blog know, Chaturanga means "four limbs" in Sanskrit. Applied to this ancient version of chess, "four limbs" refers to the four divisions of the military in ancient India: Infantry, cavalry, elephants and chariotry. These four elements would go on to evolve respectively into the pawns, knights, bishops and rooks of modern chess. 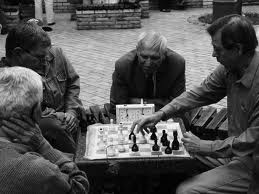 Folks doing chaturanga with their brains
[Image taken from here]

But then again, why can't it be the other way around? Why can't Chaturanga Dandasana--and Ashtanga yoga as a whole--be chess for the body? For all we know, when we do Ashtanga, we may very well be playing chess with our bodies!

Ah well. Chess for the body, Chaturanga for the brain... does it really matter, in the end? Alright, I really really need to go get some work done now... More later.
Posted by Nobel at 4:07 PM